The concept of Superior Semicircular Canal Dehiscence (SCD) is very interesting. This condition was discovered by Dr. Lloyd B. Minor of Johns Hopkins University and reported in 1998. SCD occurs when the bone overlying the inner ear erodes or thins out to the point where the top part of the balance system, the Superior Semicircular Canal protrudes and is in DIRECT contact with the pulsating brain above. This leads to a myriad of symptoms.

The following are symptoms of SCD

will make you feel like you are doing forward and backward rolls skewed towards the right. Nodding your head up and down stimulates the superior semicircular canals. It does so by fluid dynamics. There is fluid within the semicircular canal, which is much like a hula hoop with water inside.

When the hula hoop rotates, the fluid lags due to the inertia. This lag is detected as a relative movement of the fluid to the canal by a motion detecting cupula (a nerve sensor) which signals the brain that there was motion. At rest, there is no motion in the fluid and so the cupula reports that all is still.

Normally, the superior canal is completely encased in bone so pulsations of the brain cannot move the fluid in the canal.

Now imagine if there was no bone separating the brain from the inner ear . Pulsations of the brain would would squeeze on the semicircular canal and move the fluid inside to and fro. This would cause the motion detector to move back and forth and give a false sense of movement when the patient is sitting still. Can you see how this could cause a problem with dizziness?

Since our eyes are tied to our inner ears, movement of the inner ear fluid will cause our eyes to oscillate creating nystagmus. This makes it difficult to focus.

So then how does it affect hearing?

The concept is actually easy. If one considers the eroded area as a window or hole in the inner ear, then sound energy can leak from the inner ear and dissipate. This leakage of sound energy equals a reduction in loudness.

It is based on a "mobile third window". Here is the concept in a simple analogy. 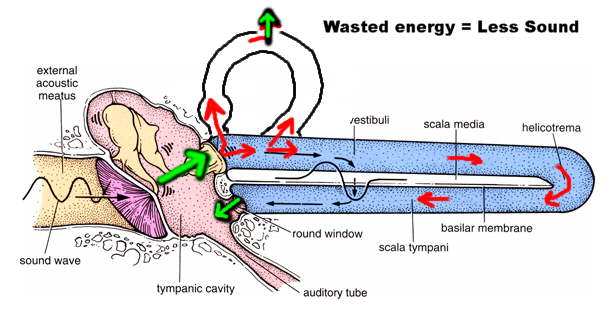 Hearing and Balance function are housed in the same organ, and share the same fluid.  Hearing is based on vibrations.  Sound waves pushes in (and then out) on the oval window, forcing fluid to oscillate through a long tube and bulges the round window out (and then in) at the other end.  That is like having a building with a long hallway, with two doors at either end.  If the entire hallway is packed with people, and another person enters... somebody must exit at the other end.  The traffic movement at that other end is detected as sound. The balance function on the other hand is a closed system, set up like a race track.  Movement of the fluid (or people- as in our analogy) within the racetrack is detected as head movement.

The leaky window is the superior semicircular canal dehiscence.  Therefore closure of that window can help stop both the sensation of dizziness and improve conductive hearing loss.

There are two ways to surgically repair a superior semicircular canal dehiscence.  One way is to cover the window by placing something on top of the window.  The other way is to plug the canal (racetrack).

The idea is to prevent the leakage of fluid pressure energy, while maintaining continuity of the fluid flow internally by covering the window with a firm solid substance.

This is done with a small piece of bone that is laid on top of the weakened (dehiscent) area.  Synthetic bone paste is used to "concrete mortar" that piece of bone in place.  This procedure involves opening up a window in the skull and lifting up the brain to get to the area of the leak. Although this sounds like a major endeavor, it is surprisingly well tolerated. Patients go home within a day or two in the hospital.

The idea is to block the fluid flow through the semicircular canals, thereby shutting down the sensors so that the false sensation of motion is prevented.  Abnormal fluid flow causes so much dizziness and distress that it is better to have no fluid flow than abnormal flow.